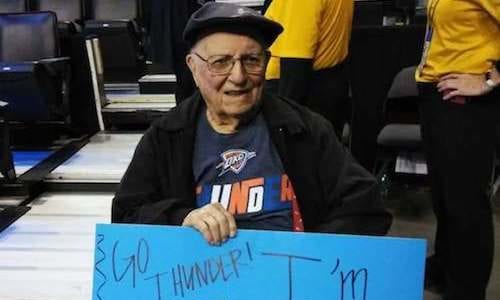 Before Roy Cummings turned 100 years old, he had never been to an Oklahoma City Thunder game. To celebrate his birthday, the Concordia Life Plan Community resident attended his first game on Feb. 11, where he was given his own personalized jersey and awarded the U.S. Cellular, “Photo of the Game.” 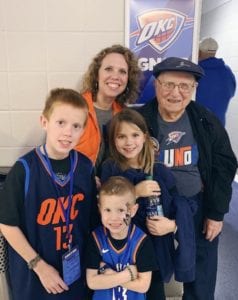 “We were so thrilled to give Roy this opportunity to go downtown and do something new for his birthday,” said Danny Eischen, Concordia Executive Director. “The Thunder worked with us to make a memorable experience that honors Roy and his 100 years of life and it was certainly a stellar night.”

Along with the jersey and being named the Photo of the Game, Cummings and his family also received pre-game access to see the players warm up and a birthday shout-out on the jumbotron. Additionally, Cummings was able to cheer on the Thunder during a memorable win against the Trail Blazers with his close family and friends. 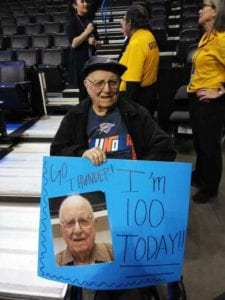 Concordia is an assisted living and independent senior living community located in Oklahoma City and committed to upholding Christian values by serving the others. To learn more about Concordia’s services, skilled nursing program or memory care, click here.