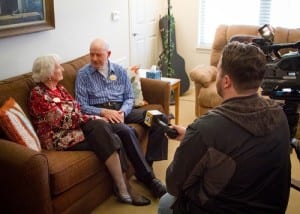 Two Concordia residents, Clyde and Phyllis Buchanan, shared their story on Valentine’s Day with a local ABC reporter. Clyde remembered the first time he met Phyllis in 1953 in high school — “the cute little blonde girl in a red turtleneck sweater.” Clyde and Phyllis got engaged, but called it off and married other people.

Years later in the early 1980s, both Clyde and Phyllis were again single and reconnected when Phyllis saw Clyde’s name in an alumni book and wrote him a note. She was living in Arizona at the time, and Clyde bought her a round trip ticket to visit him in Texas.

“She got off the airplane and within ten minutes it was as if time had been frozen,” Clyde said. “It was as if we’d never been apart.” A few weeks later Clyde flew to Arizona to meet Phyllis’ children, and proposed with the same ring he had given her years before. After 33 years of marriage, 27 grandchildren, and 20 great-grandchildren, their advice for other couples is to trust each other and the Lord, and to have a sense of humor.