This news story was originally printed in The Oklahoman. 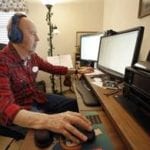 Clyde Buchanan creates individualized music playlists on iPods for residents of Concordia Life Care Community in Oklahoma City who have dementia or are rehabilitating in the skilled nursing area. [Photo By Steve Gooch, The Oklahoman]

Clyde Buchanan helps bring music and the memories it stirs to his fellow residents at Concordia Life Plan Community.

Buchanan, 81, a retired oceanographer and applications engineer, makes an individualized playlist with more than 100 songs for residents in the memory care and skilled nursing units and downloads the music on iPods.

“It’s theirs and available to them any time they want,” said Danny Eischen, executive director of Concordia, 7707 W Britton Road.

The favorite songs and the good memories they evoke bring relief to residents with dementia when they feel agitated or lonely, Eischen said. The music also calms them and makes it easier to give them care, like bathing, he said.

“It’s a great way to improve the quality of life for residents,” Eischen said. “Some residents just started singing who hadn’t spoke in years.”

Buchanan started playing guitar and leading singalongs in the memory care unit with his wife, Phyllis, soon after they moved to Concordia in 2010.

“They know all the words to the songs. They’ll smile and look at you. You take them out of the envelop for a moment,” Buchanan said.

When he saw “Alive Inside,” a documentary about music’s ability to combat memory loss, he was brought to tears. The film chronicles social worker Dan Cohen and his nonprofit organization, Music & Memory.

Concordia started the program in 2015 with private donations and grants from The Wal-Mart Foundation and Thrivent Financial, and recently received a grant from LeadingAge Oklahoma to expand it.

Buchanan said he has more than 5,000 songs on his computer — Big Band, southern Gospel, easy listening, Broadway show tunes, rock and more. If he doesn’t have someone’s favorite, he can purchase it and add it to the collection.

He has completed playlists for about 40 people so far. One woman didn’t like music, so he recorded her son and daughter talking and reading to her instead.

“He was already doing a lot of other stuff for us,” Eischen said.

“Clyde has a passion for helping people. He moved here not to be served, but to serve others. He’s a pretty remarkable person.”

Buchanan helps others at Concordia learn to use their new smartphones and resolves their computer issues. He’s the one they call when they have trouble with the cable TV or have questions about a bank statement.

The couple knew each other decades ago, then went their separate ways — she to Arizona and he to New Jersey. She was a widow with eight children when they reconnected, married and moved to Texas. After retirement, the Buchanans searched for the right place to live.

“We felt led to come here,” she said. “This is like a family. Everybody knows everybody here.”

Her husband enjoys helping wherever he is needed, but especially with residents who have dementia.

“Memory care is my passion,” Buchanan said. It started about 12 years ago when he helped care for a friend who was diagnosed with Alzheimer’s disease.

Alzheimer’s patients once “lived big lives in big houses, and now are locked in a 10-by-12 room,” Buchanan said. And the “room” keeps shrinking.

Yet, the ability to recognize and appreciate music remains.

“The part of the brain where music is stored is one of the last to go,” said Mary Brinkley, director of LeadingAge Oklahoma.

Brinkley heard about the Music & Memory program and invited Cohen to speak at the LeadingAge conference in 2015. After his presentation, the association developed its own program and began taking it to nursing homes and retirement communities.

“This is a program that should be in every single long-term care community,” she said.

Buchanan and Concordia’s activities coordinator, Delba Murphy, already were believers. Each had recommended the program to Eischen.

Murphy said she had been playing personalized music on CD players in residents’ rooms.

“Music is a universal language. If they can’t speak, they can sing,” she said. “Once they listen to that music, a certain song might trigger a memory.

“It makes them more receptive to care and calms them. It’s therapeutic.”

Tension leaves their faces, clenched fists relax, Murphy said. “They forget why they were angry or in pain and rock to the music. It’s amazing. It’s truly amazing.”

Buchanan has seen it happen many times.

About Music for the Ages

LeadingAge Oklahoma developed its Music for the Ages initiative — part of the national Music & Memory program — to train nursing home staff to use personalized music to assist residents with Alzheimer’s disease or related dementias.

A $353,000 grant through the Centers for Medicare and Medicaid Services and the state Health Department is funding the two-year effort.

Phase I brought the program to 45 facilities. Mary Brinkley, director of LeadingAge Oklahoma, said an additional 55 homes will be recruited starting in February.

LeadingAge Oklahoma will host monthly support sessions for staff to discuss successes, solve challenges and provide additional training. Nursing homes will receive start up equipment and certification. They also will participate in a research study to measure the effectiveness of the program.

Families with loved ones in Medicare and Medicaid facilities should encourage the administrators to get involved, Brinkley said.

Playing personalized music for each resident not only relieves agitation, it reduces behaviors that can make caring for them difficult for the staff, she said.

Baptist Village of Oklahoma City piloted the Music & Memory program in Oklahoma in 2014 through a scholarship from the national nonprofit. The program is being expanded now, thanks to the Music for the Ages grant, said Michelle Billings, R.N., health care administrator.

“We love the program,” Billings said.

One resident has begun feeding herself again after being exposed to the music. For others, the calming effects make visits with families more enjoyable for everyone, Billings said.

“Increasing a person’s ability to positively interact with others through the power of music is really priceless,” Brinkley said. “The music has a connection to the emotion system. It’s sort of a back door to the mind, and that’s why people come alive.”