Concordia Residents Compete in Their Own Version of Rio Games 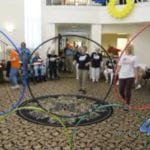 Concordia Life Care Community hosted a week-long Olympics-style event for residents and staff in accordance with the 2016 Summer Olympic Games in Rio de Janeiro. The Concordia Olympics took place Aug. 8 – 12 and included opening and closing ceremonies as well as competitions throughout the week such as bean bag toss, ping pong, wii bowling, wii tennis, javelin throw, bocce, croquet and physical exercises such as wall push-ups and chair sit-and-stands.  The event was a great way to bring Concordia residents and staff together for a week of fun and friendly competition.  It was a testament to the health and wellness of our residents and an extension of the fitness activities Concordia provides year round.

Participants were divided into 6 “countries”, with each country including residents from Independent Living, Assisted Living, Skilled Nursing and Memory Care, as well as Concordia staff members.  It was a great way to bring all areas of the community together in fellowship to support one another.

A Brazilian pastry chef,joined the residents and staff members during the week to share Brazilian food, Portuguese words and other elements of Brazilian culture in honor of the 2016 Summer Olympics host city.

Ashley also put together a story about the week that ran on the KFOR evening news.

The week ended with a closing ceremony where Gold medals were awarded to the winners of each event and the winning country was announced.